A seven-year drought plagues the entire region surrounding the country of Nishtif, leading people to wonder if their goddess Scheknt has abandoned them. In contrast, young noblewoman Neqtia has lived a comfortable life insulated from hardship and suffering. One of the poorer surrounding countries, Djedi, sends their usual tribute of natural resources and livestock to Nishtif in exchange for the larger country's aid and protection. Rumors that two attractive slaves are among the cargo intrigue Neqtia. What lies in store for her after the slaves are brought to live at her family estate...? 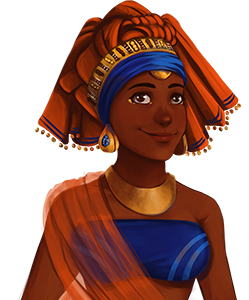 Neqtia: Daughter of a wealthy noble, she is kind-hearted and sweet, but also naive about anything outside of her personal world. She can come across as self-centered due to her sheltered upbringing, but she is well-meaning. 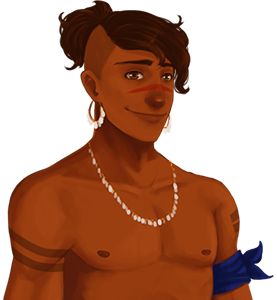 Jyrik: One of the two slaves from Djedi, he was chosen from among the commoners because of his youth and handsome looks. Smooth, confident, and knowledgeable, Jyrik works in the garden of Neqtia's estate, but as he and Araerda are meant to be trophies, he's more like an exotic plant himself. 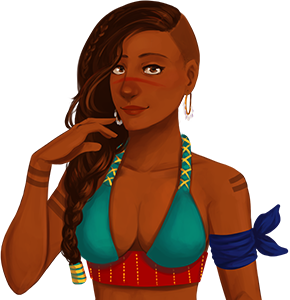 Araerda: The other slave brought from Djedi, she is considered one of the most beautiful women of her country. Araerda works as one of Neqtia's handmaids and is a kind, patient listener who takes to Neqtia instantly and showers her with compliments and attention.

Taarradhin is a visual novel done by Cyanide Tea for NaNoRenO 2014. As usual, all writing/programming was done by Lorelei while all of the art and UI design was done by Auro-Cyanide. Auro also came up with the story and characters this time around. The music is all stock music by Pierrot Lunaire. Special thanks to Kitty for beta testing!

Please also consider updating your graphic card drivers before playing Taarradhin. If you're having display problems, please check out this help page in the Ren'Py documentation.

If you play the game, please use the #taarradhin Twitter hashtag or Taarradhin Tumblr tag if you can!

Taarradhin won best EVN of the year in the 2014 VNs Now Best Ofs.

This game is such an amazing exemple of how it is possible to make something that has an simple and short storyline be amzing. I really loved everything. The art is so pretty and amazing and the story has an great messege. Honestly 10/10.

I felt that beyond the art, there really wasn't a lot to this game. Aside from the setting of the game being built seemingly completely on ignorant colonialist stereotypes, the game's quality suffered heavily from the writing. The characters have the personalities of a bunch of chewed-up rice crackers.

For example, you know the male slave (I don't even remember his name; that's how little of an impact was made on me) is smart because the writers *outright say* he's smart. And because he knows what a trout is, I guess, but...what?? And the slaves are so bizarrely okay with being slaves. You don't get to see any emotional development beyond what is heavy-handedly narrated at you. No coping with being *owned,* no tangible shared moments between the characters, nothing. All there is is the characters saying things like "I've never felt so close to someone before," with no buildup or anything. The attachment the characters claim to feel to each other is completely unearned. It was infuriating to slog through what felt like the same 3 lines of dialogue for hours to get the various endings. I think the people at Cyanide Tea have potential, especially in the visual/design area, but I would not recommend this one.

a lovely little vn, i fell in love with the characters and the way that throughout the different paths you learn more about them. i teared up at the true ending and the art is gorgeous!!

Wonderful little game, with a great story line and characters and amazing art style! Very realistic too, when it came to how "rich" people see the rest of world!

I also really liked the option to choose between a guy and a girl, regardless of the fact that the main character was a girl! Really innovative and well thought through!

Overall, great experience and I highly recommend it, considering the fact that it has multiple endings!

I wish you luck and the best in your future projects! ♥️

Oh my goodness this game was wonderful! There was an incredible amount of subtlety in the way that both Jyrik and Araerda were written and I loved how Neqtia's character developed! Artwork was stunning as well ;). I feel blessed to have been able to play this game!

I'm absolutely in love with the art, design, and UI. Haven't read through much of the story but I thought I should gush over the art for now.

This was a wonderful game. The story drew me in and the art is quite beautiful. Im happy to say i was able to complete all the endings.

The artstyle is truly amazing, great and beautiful. Sprites are very great and detailed, Characters are very great, interesting and sexy :D  CGs and backgroungs and UI are great, too. Plus music is very very nice.

Plot is very interesting. Maybe it's a bit simple and short but I think it's good this way. And it has replay ability, especially to see other endings. Choiches are meaning ful and each romance option has own route.

I was very impressed by this game! It's so cleverly done.

The way the first "not real" endings goes make us completely sure that the true ending is how it's supposed to be, that ignorance must be fought against and that we must be brave to stand for what we believe is correct. I personally think that there is some kind of reward to people that are open to know the truth, accept it and willing to stand for what is right, even if it comes with a great cost.  Even without any reward, I still think it's worth it to be that kind of person, and that's why I love the final end.

The way all the "routes" end up working together as a whole "meaning-maker" is awesome. This game is one of a kind! <3

I have an uncomfortable feelings every time I approached the "not-true" ending, just like there is something off from the big plot... but then I am very glad and happy to the conclusion of the True Ending :')

Such a beautiful game! Both art and story-wise. Heck, even the music was great. The true ending was still very touching, even though this is my second time playing it. Thank you for sharing.

so i was wondering what cultural/ethnic backround are the people in the game based on? :) very curious

I was immediately drawn to this game because of its artwork. It's different and exotic. But the story was short as I played through different endings. To be honest, the game didn't do much for me.

I liked this game. Sure, it was pretty short but the story was really well developed! Loved the characters and art works, too! I weeped at when I got the "true ending." It was so heart-warming. I really like your works^^ 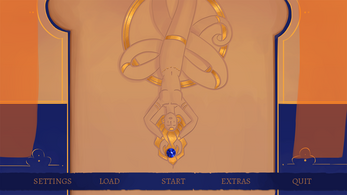 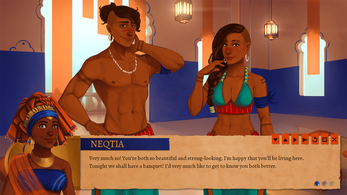 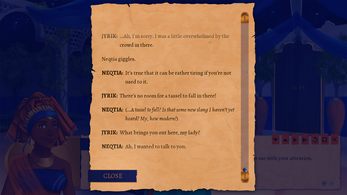 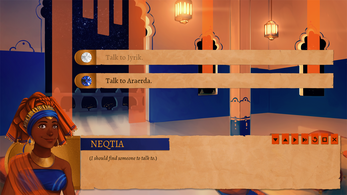