Nachtigal tells the story of Miranda Namatgira, a bright college student who travels to Belgium for a holiday. One evening, she loses track of time while sight-seeing and becomes lost in the woods. Just as she's about to consider camping outdoors for the night, Miranda happens upon a hauntingly beautiful castle. She decides to venture inside, but nothing could have prepared her for the bloody sight she beholds there...or for the two vampires who capture her. 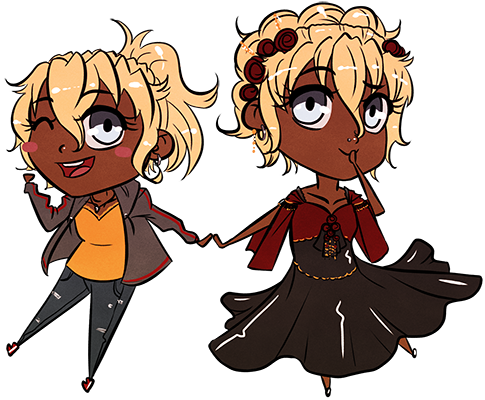 Miranda Namatgira is a Belgian history and architecture buff who is studying European history and art in college. She is bright and generally optimistic, but can also be sharp-tongued and sarcastic. Miranda likes to help people and often gets into trouble because of her unwillingness to give up. Luckily, her sensitivity and skills of perception have helped her out on multiple occasions.

Luca Faveaux is a cold man who possesses a dry wit. A third generation vampire, his duty is to serve and protect the Nachtigal family, particularly Adrian. He is not one to suffer fools lightly and often clashes with Adrian on matters of propriety. At first, he believes it would be best for Adrian and the Nachtigal family if Miranda is killed, but over time his opinion of her changes...

Adrian van de Nachtigal, Count de Mercy-Argenteau-d'Ochain, is a very confident vampire who is in constant search of entertainment. Being the youngest of his second generation siblings, he's used to being doted on. He is intrigued by Miranda, but gets angry when she tries to pry into his secrets... Though he may not always admit it, he is very thankful for Luca's friendship and guidance.

Nachtigal is a short otome game by Cyanide Tea about vampires. It was originally released on November 4, 2013. There are six full-length endings, two dateable characters, and 11 CGs in total. The story has a touch of horror, but is mostly pretty fluffy. WARNING: This game contains some gore in one of the bad endings, along with some violence throughout. (Trigger warning: suicide, psychological manipulation/abuse) Player discretion is advised.

Please also consider updating your graphic card drivers before trying Nachtigal. If you're having display problems, please check out this help page in the Ren'Py documentation.

If you play the game, please use the #nachtigal Twitter hashtag or Nachtigal Tumblr tag if you can!

It's been years since the last time I played this, but it's still as beautiful as I remember<3

aaaa I remember playing this years ago!!! Luca was still my favorite then and now <3 The story was very interesting to read and that one ending was just... brutal... (╹д╹;) Nonetheless, I enjoyed the game ( ´ ω ` )

I enjoyed the escape ending and the Adrian ending the most of all! Followed by the menois a troi and Lucas ending.

I really enjoyed this game. Keep it up!

I played this about a year ago and was so sad that i couldn't find it and then yay once again i meet this wonderful game!! Highly recommend its awesome~

Amazing game! Luca was definitely my favorite but I loved Adrian as well. I also loved how intense the bad endings were, it made me pick carefully the second and third plays.

I really love this game, i recommand it ! it's a little bit too short, but really nice ^^

Thank you so much for making this game! It's really good, and the music is so cool. Especially "Danger Approaches", on my

two words. LOVE IT! i got this years ago and decided to replay it and this time leave a comment. I cant wait for more romance from you guys.

Thank you for this game, I loved it! The dark twists really gave it an edge.

To the people that want to play but can't get it to download, copy the url into a browser other than itch.io and it will allow you to get the zip file and install it that way.

This game was pretty special, different from everything I have played before. I have to say it was nice. I have always been a fan of vampires and it is cool to play one VN with vampires as options for romance.

I am good at drawing and well... don't be offended but the current ones just suck.

but still good luck my friend!! 😉

i dig everything about this game! the only way it could be better is if mc could take charge more, but i get that that wasn't the goal here, and the good luca ending did make me happy. i wanna see more games like this!

her !! anyway how it was pretty good  and hope you good luck  in the near future

p.s you are really are great thank you making the game :3

I was having issues downloading it but had success after clicking on the link word Nachtigal that's above the character description. Takes you to a different page with individual links for each OS. Hope this helps someone.

It seems like i unable to download this game even though i dont think it eat up much space in my storage. It just automatically back install  mode even though i click it thousand times.  Currently using Windows 10 btw..

It is amusing to see Miranda adapts the opposite behaviour of her LIs, complementing  each vampires'  characters. Alteration between the dark sinister tone with lighter atmosphere in the mansion and the theme of the story itself are presented with great graphics and fluent choice of music. Thank so much for the galery book and keep up the good work ;)

is there a walkthrough? :)

Yes The game is not allowing us to download it. It seems like Im not the only user experiencing this. VERY disappoitning becuase I was excited to try the game out :(

I can't get it to install for some reason. :(

I played this ages ago, but I am commenting now. This was really fun to play. Both of the guys were fun/interesting to deal with. The "bad" endings did freak me out a bit, but then again, who isn't? Is there going to be some sort of sequel to this? Not like a direct sequel, but kind of, with a new MC but in the same universe?

That was actually really fun to play! I don't know the difference in my steps between Pet and 3 endings, but I actually had a lot of fun! Adrian's ending was surprising, but Luca gave me the common quiet/distant guy in an otome feel, but that's why I go for those characters first. Also, screw you and the Egbert scene! I'm a raging Arachnophobe and I freaked out just thinking about it. <3

LOVE this game so very much! If only it could be longer! (drool~)

I really enjoyed this game, the endings were sometimes romantic, and sometimes surprising!

Love this game will there be a sequel related to supernatural beings I would love to see one with more than just vampires. maybe werewolves and witches?

A some sort of sequel/follow-up will be nice, wouldn't it?

I love this game so much thank you for making it 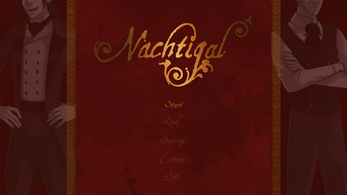 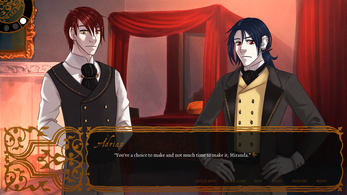 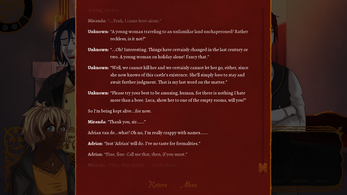 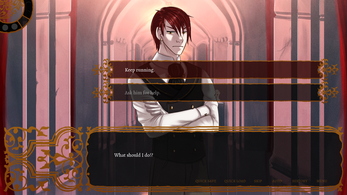 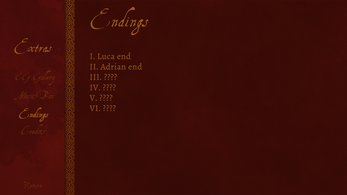